The Making of ‘Nehalennia’ – or, The Disappearance of the Mannequin.

Every once in a while we love to share a guest post from one of our wonderful tinyStudio Creative Life magazine contributors. This one takes you behind the scenes of the inspirational story shared in Issue 10 ( find it here!)by Ineke De Brouwer of the Netherlands. This post extends the story even further than in the magazine article, and it was too good not to share 🙂 We how you will love it as much as we have, and be inspired to find some of the stories and explore the history and environment around where you live too!

This is the story of the shawl Nehalennia, and the beach of the Zeeland seaside resort of Domburg.

As a yarn artist, my senses are always on edge for any kind of inspiration. It is no surprise that there is a lot of inspiration to be found in Domburg. Healthy air and special light have attracted bathers and artists to this Walcheren town for many decades. From 1870, an artists’ colony developed in the Zeeland art city of Domburg. Many famous painters, sculptors, poets, writers, and other artists were inspired by the light, the sea, and the dunes. Ultimately, the First World War put an end to the thriving artists’ community in this special place.

Domburg is the oldest seaside resort in the region of the Netherlands known as ‘Zeeland’, and is located directly behind the dunes near the beach. The beach is best known, like the rest of the beaches of Walcheren, for its wooden pole heads, characteristic beach houses, and the most hours of sunshine in the Netherlands. The typical water tower and Zeeland windmill were a source of inspiration for artists such as Toorop and Mondriaan.
Also impressive is the discovery of the Goddess Nehalennia, a pre-Christian goddess who was invoked by merchants and salt traders to protect sailors and cargo during dangerous journeys.

Domburg and Colijnsplaat were Roman ports and trading places. Around 150 AD there were temples to Nehalennia in Domburg, the remains of which were uncovered during a stormy night in 1647. In the 1970s, a fishing ship and divers removed many of the altar fragments from the water. A Mondrian bench has been placed on Domburg’s boulevard, on which a bronze statue of the goddess Nehalennia is seated with a view of the waters of the North Sea. 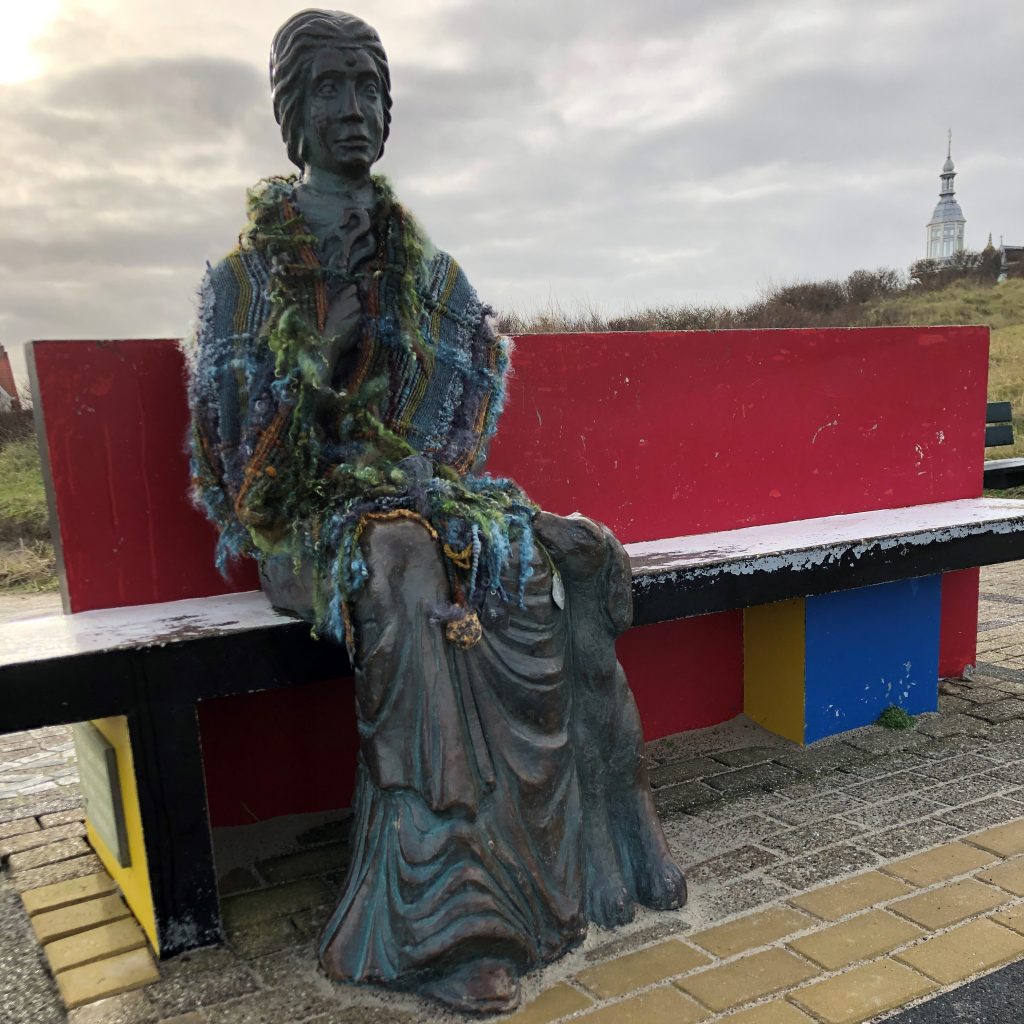 My personal relationship with Domburg dates back to the 1950s. At the age of seventeen, my mother-in-law (Mientje) had a job as a servant maid with a noble family from my hometown, Brummen, in the east of the Netherlands. Every year this family spent the summer in their holiday home in Domburg. The luggage was sent ahead by train. after which the family, including my mother-in-law, and the silverware, took the long journey by taxi.
The family took good care of Mientje. They gave her the opportunity to do her household chores in the morning and have fun in the afternoon.

As a result of which my mother-in-law came to build up her own circle of peers and acquaintances. And a foundation was laid for years of holiday fun. Years later I also became devoted to Domburg. And my affection for this place led to the making of the scarf Nehalennia. My sister and I recently visited Domburg several times for this project. It was a great pleasure every time.

The inspiration for this shawl arose in autumn 2020. During a walk along the beach. Dutch beaches are tidal. Besides the wonderful feeling of space, sun on your face, and wind through your hair, there is continually something to pick up. At low tide, there is always a beautiful shell, polished by the sea stones, or a strangely shaped piece of wood in the sand. If you search carefully and are very lucky, you will sometimes find a fossilized shark tooth or a piece of amber. It is actually a form of treasure hunting. In addition to tangible objects, you will also find very inspiring structures on the beach. After high tide, the waves often leave a beautiful composition of ripples in the sand. 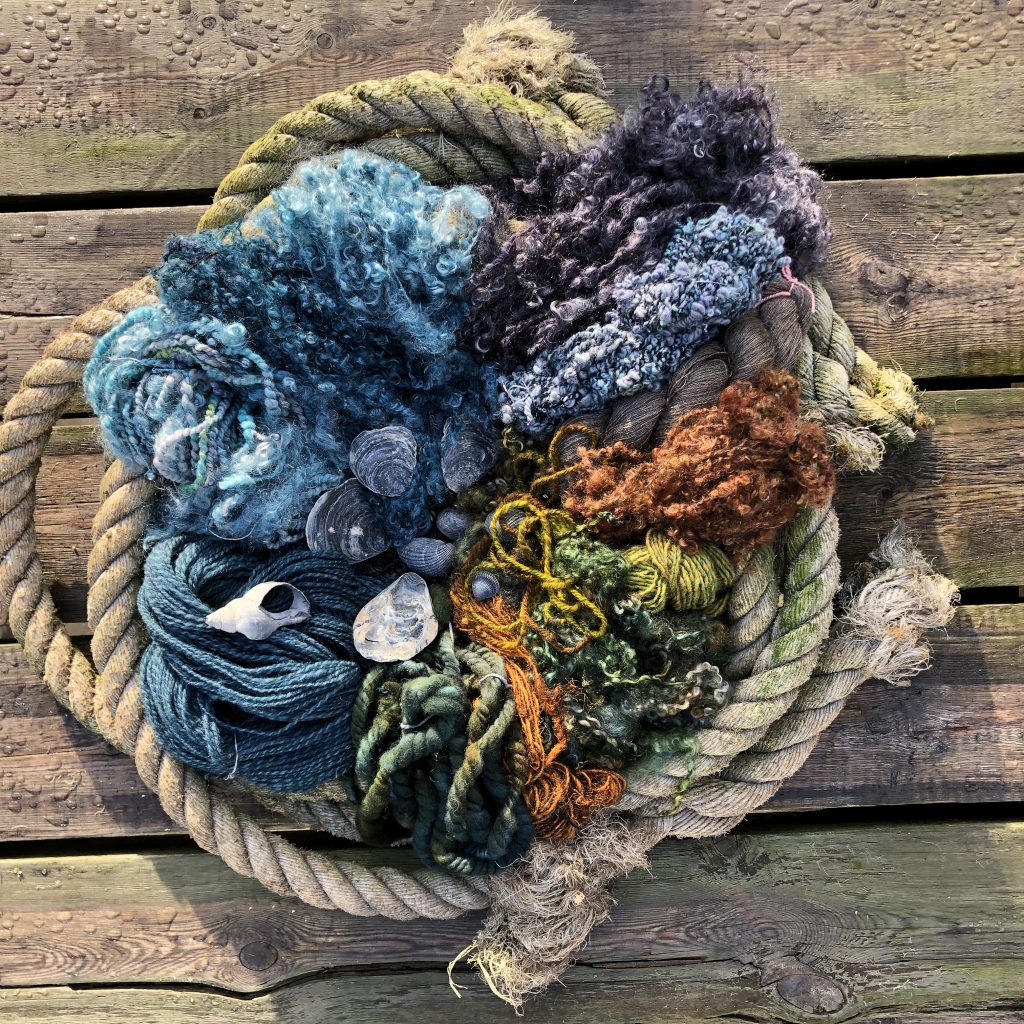 The characteristic wooden pole heads, intended to prevent erosion of the coast, have a growth of barnacles, mussels, and seaweed, giving them their own color and texture. The pole heads also provide beautiful drop shadows.

And of course, the enchanting beauty and ever-changing colors of the sea are a never-ending source of imagination.

During spinning and weaving de shawl Nehalennia by using new and innovative techniques, I have tried to capture the sensation and emotion of the beach walk. By using peduncle silk in the weft to keep the weaving relatively light, the feeling of air and wind is preserved. Adding some of my beach treasures to the fringes has completed the theme of the shawl. 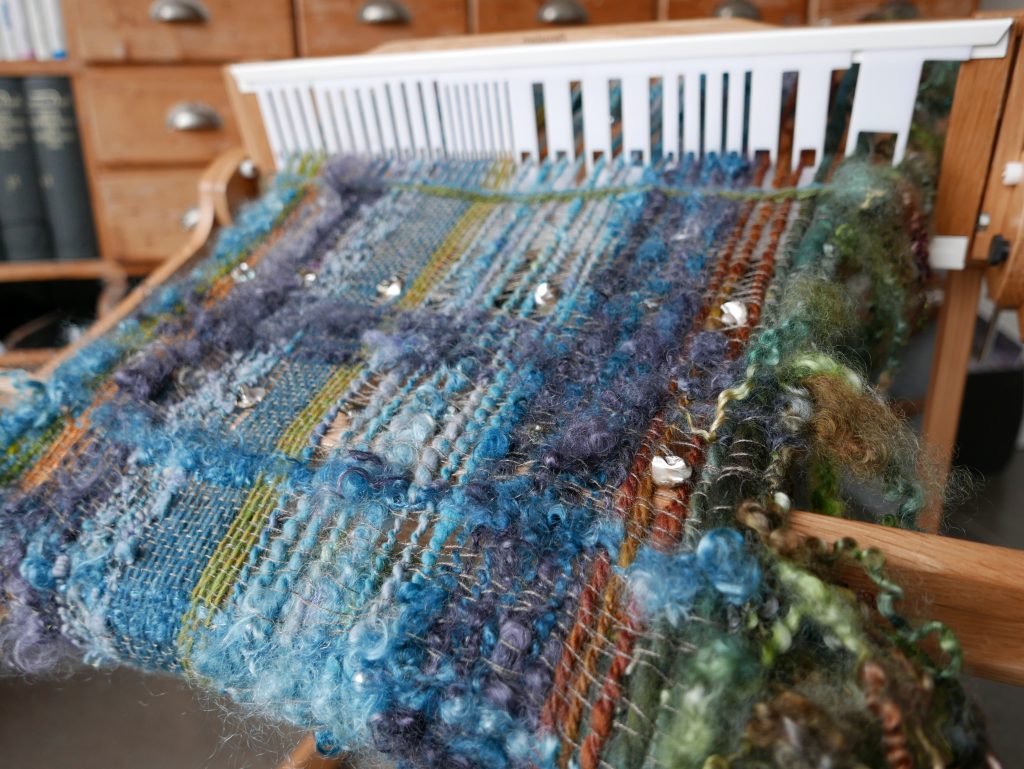 After the shawl was completed, my sister and I went back to Zeeland. You should never pass up an opportunity to stay in Domburg for a few days. 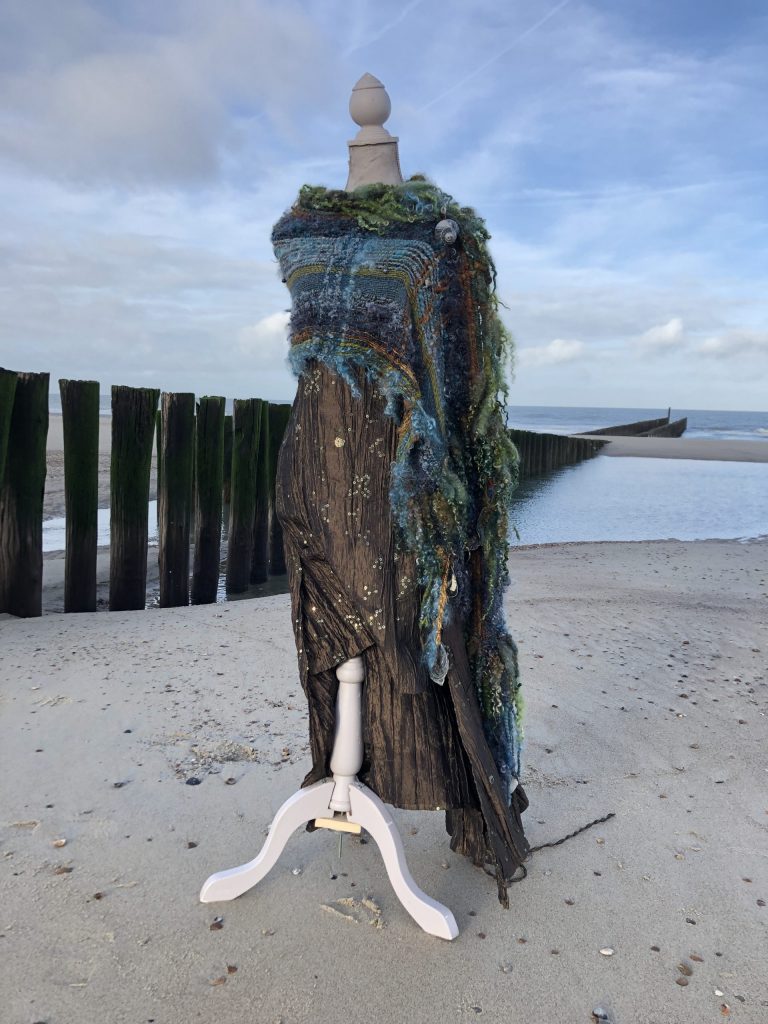 This time we planned a photoshoot of the project. The constantly changing weather in the Netherlands does not make organizing such an activity easy. After a few days of waiting, there was finally a beautiful floodlight over the beach. Despite the icy cold wind, we went to the beach. Packed with photo equipment, tripod, and mannequin, across the dune. During the photo shoot there was a very strong wind, the mannequin, as well as the shawl, was constantly blown over. There is enough sand on the beach to make the mannequin heavier, so it was quickly filled with kilos of moist sand. This seemed to solve the problem. For the time being, the mannequin kept standing straight and we could take our pictures.

But then a particularly strong gust of wind came and toppled the mannequin and broke one of its legs.
Fortunately, most of the mannequin photos had already been taken. So we walked on to the row of wooden pole heads a little further on, which make a nice dramatic background for taking photos. We made the rest of the photos on a photogenic spot on the beach. We even had to flee from the rapidly rising tide, while the shawl was still blown against the posts. 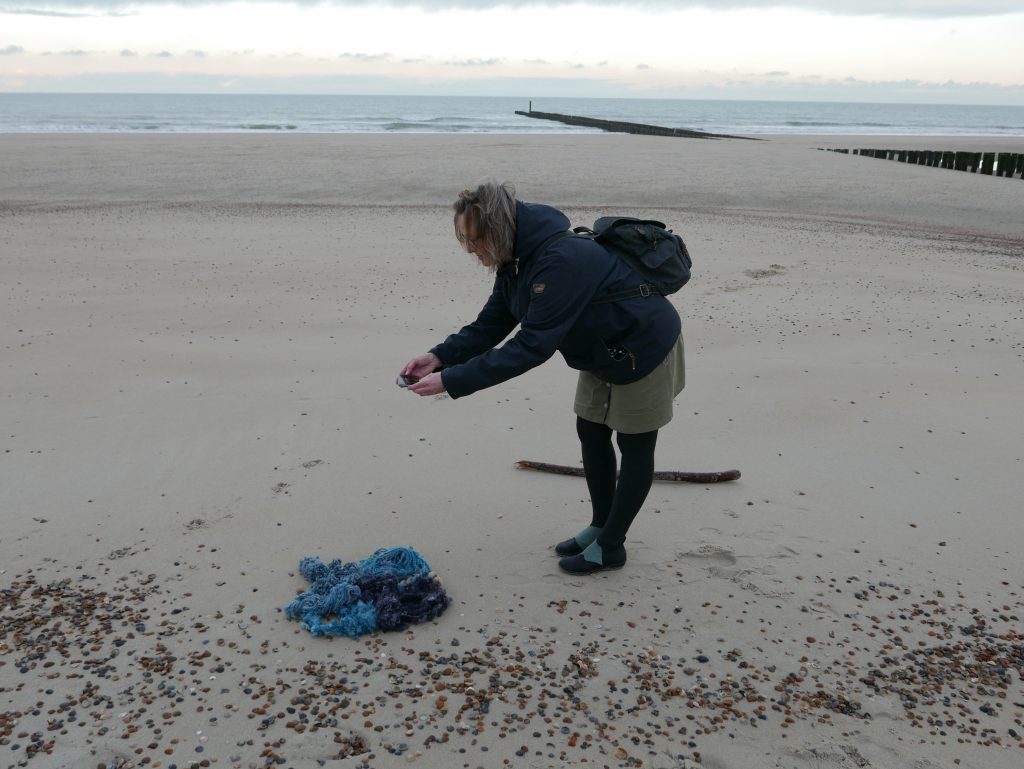 This made a pair of wet, cold feet inevitable.

After making all the photos, we wanted to gather our things and go for a hot cup of coffee to warm our numb hands. To our surprise, the mannequin with the broken leg had disappeared. Since the tide was rising, we wondered if the sea had taken her. Over time, we found tire marks and footprints in the sand. Apparently, beaches in Domburg are kept so clean that our mannequin had already been taken away by the clearance service.

For a moment we were confused until we realized it was a lucky accident. Losing the sand-filled mannequin with the broken leg was no great loss. It would have been quite a job to get the damp sand out of the mannequin and drag it off the beach. Thanks to the beach clean-up service, we didn’t have to do that with our numb hands.
The photos were successful and the article has been written and published in tinyStudio creative life magazine.

To conclude this project and this story, the Nehalennia scarf was given a special purpose. It is included in the art collection of the daughter of the noble family. This now elderly daughter has, after many years of wandering around the world, found her domicile in this beautiful seaside resort Domburg on the peninsula Walcheren. And is still in contact with the now ninety-year-old former housemaid Mientje. 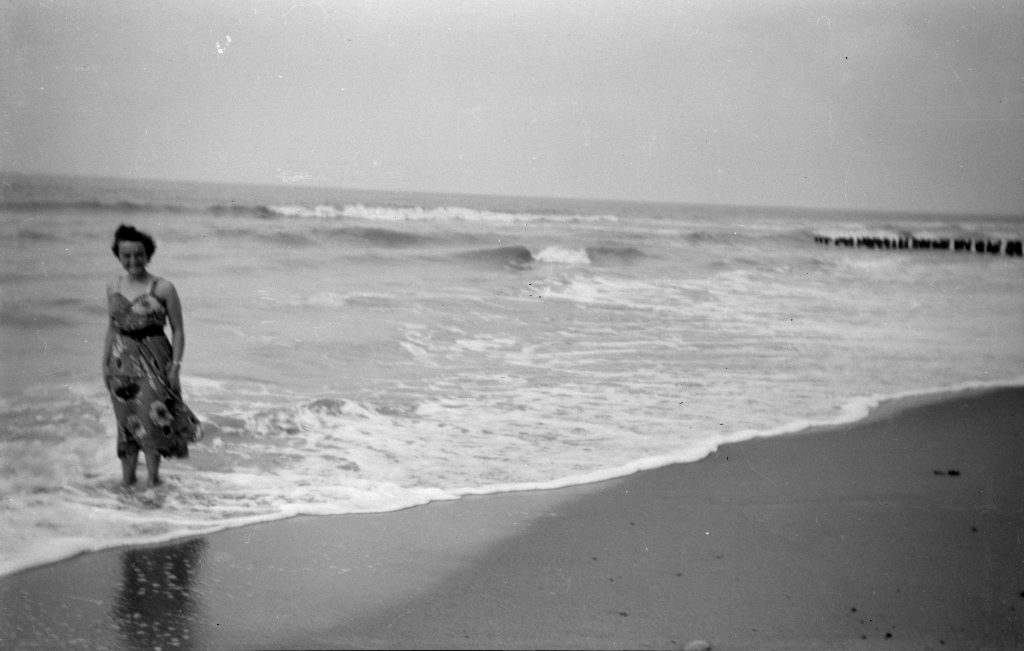